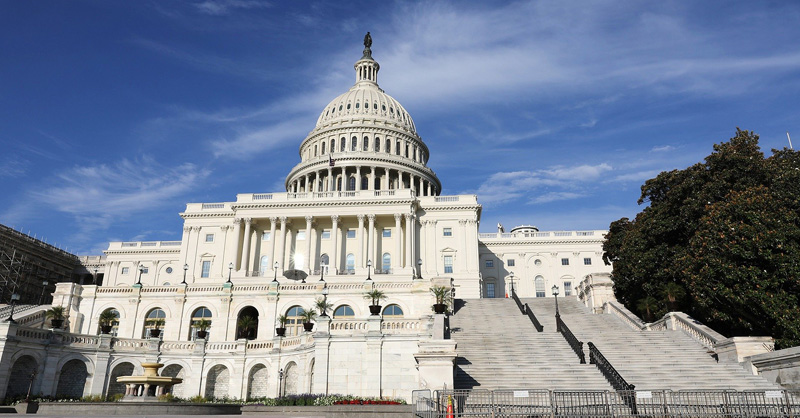 At a time when once arcane issues involving antitrust are making headlines, including whether the laws are even adequate to rein in tech giants, it’s doubtful a newly elected Congress will succeed in tackling such big matters.

Voters have once again elected a Democratic House and, at press time, it appears a Republican Senate. If that partisan division holds, look for clashes in the two chambers’ views on updating the antitrust laws, though there’s some overlap in concerns about the power of the Goliath digital platforms.

The recent release of the House Judiciary Committee’s mammoth report on competition in the digital markets is a prime example. Its pitch for a sweeping overhaul of antitrust law isn’t likely to find a receptive hearing in the Republican Senate, though some of its more modest proposals might win some bipartisan support.

What both chambers are expected to agree on is to boost resources for the Federal Trade Commission and the Justice Department’s antitrust division, especially given the large jump in merger and acquisition activity, which is set to accelerate in coming months.

Seven-term Senator Charles Grassley of Iowa, the second-oldest member of the upper chamber at 85, takes the gavel of the Judiciary Committee after a two-year hiatus. Though he isn’t a lawyer, Grassley has been active on antitrust issues, usually focusing on narrow subjects within the field.

“He comes at the issue because of his interest in agriculture. His heart is in the right place and he’s had staff that is knowledgeable about antitrust,” Seth Bloom, the top Democratic staff member on the antitrust subcommittee during much of the time from 1999 to 2008, told FTCWatch.

Senator Dianne Feinstein of California is likely to remain the top Democrat on the panel. Like Grassley, she is a non-lawyer, but unlike the chairman she hasn’t been active on antitrust issues. At 87, she’s the oldest member of the Senate.

Bloom added that committee chairs typically give the subcommittee a fair degree of autonomy. Don’t look for the committee to be on the cutting edge of antitrust reform, but instead, expect Grassley to work with Antitrust Subcommittee Chairman Mike Lee on less politically combustible issues such as legislation that would more closely align the merger review procedures of the DOJ and FTC — a move that House Democrats are likely to resist.

Lee, a Utah Republican, is the main sponsor of the Standard Merger and Acquisition Reviews Through Equal Rules Act, which would eliminate the FTC's power to conduct an administrative review of a proposed merger. The DOJ has no such power, as it must fight its merger challenges in federal court.

Lee also has led the charge that the big tech platforms — Facebook, Google and Twitter — have used their market power to thwart conservatives by engaging in “ideological discrimination.” He’s promised more oversight as Republicans pursue modifications to Section 230 of the Communications Decency Act of 1996. The law provides a legal shield for the platforms against lawsuits arising from user-generated content.

Democrats have fired back, charging the real problem isn’t bias, but that the platforms have failed to do enough to take down harmful posts that spread misinformation.

Bloom added Lee has been critical of Google. For example, the senator cheered the Justice Department’s landmark lawsuit challenging the company for using anticompetitive practices to maintain its monopoly. Lee tweeted it’s “an encouraging sign in our country’s ongoing battle against the pernicious influence of Big Tech.”

Senator Amy Klobuchar, a Minnesota Democrat and ranking member of the antitrust subcommittee, wants to modify the antitrust laws to help undo what she sees as the increasingly pro-defendant tilt of courts. She would shift the burden of proof in certain large deals to the companies to show that their tie-up won’t undermine competition.

While such ideas may not gain much traction in a GOP-controlled Senate, Klobuchar has joined Grassley on legislation to update merger filing fees and lower the burden on small and medium businesses. The proposal would raise additional revenue to pay for beefing up the DOJ’s and FTC’s enforcement efforts.

Over in the House, the leadership of the Judiciary Committee and its antitrust subcommittee are expected to remain the same. Judiciary Committee Chairman Jerrold Nadler of New York hasn’t been especially active on antitrust matters. By contrast, during his two years at the helm, Antitrust Subcommittee Chairman David Cicilline of Rhode Island has aggressively led the investigation into the dominance of tech platforms, focusing on Amazon, Apple, Facebook and Google.

The provocative report that followed included a tough indictment of the companies’ abuse of their monopoly power to throttle competition and charged that there’s serious under-enforcement by the antitrust agencies. Given those dynamics, it calls for the laws to be revamped, including a shift so that mergers resulting in a single firm controlling an outsized market share be presumptively prohibited. The report also calls for shifting the burden of proof to the merging parties to show their deal won’t reduce competition — a move aimed at increasing the likelihood that anticompetitive deals are blocked.

Although the report’s more modest proposals, including the one to shift the burden of proof, attracted some GOP support on the committee, its push for more sweeping changes faces big challenges. Even on the burden shift proposal, former FTC Commissioner Joshua Wright tweeted he is “very skeptical” it “will get much, if any, support from conservatives.”

Recurring efforts to move privacy legislation will continue, but the same hurdles remain. A measure by Senator Jerry Moran, the Kansas Republican who chairs the Senate Commerce Subcommittee on Manufacturing, Trade, and Consumer Protection, would give consumers expanded powers, but it would not allow individuals to sue companies for violating their privacy. It also would preempt state laws. Democrats oppose those two provisions and have introduced measures in the House and Senate without them.

Jeff Chester, executive director of the Center for Digital Democracy and a veteran of the privacy wars remains optimistic despite the obstacles. “There is more pressure coming for change,” he said.

New look at the top

Still, as partisan divisions on Capitol Hill will probably continue, so will such differences be evident on some big-ticket issues at the FTC. The agency has long been known for its bipartisanship regardless of which party controls the White House, but the five commissioners who assumed office at roughly the same time in 2018 have clashed over a number of high-profile cases.

Former Vice President Joe Biden’s election as president means changes on issues at the FTC that likely will follow a course along the lines of the dissents of Democratic Commissioners Rohit Chopra and Rebecca Slaughter. That includes more aggressive enforcement on vertical deals and pharmaceutical mergers, as well as a tougher approach toward individual liability of corporate executives.

The big unknown, of course, is Biden’s choice of chairman, a decision on which the president may face lots of pressure from the progressive wing of the party versus the more establishment wing. “He has worked closely over the years with former FTC Commissioner Terrell McSweeny, and if he looked to her either to serve as AAG [assistant attorney general] or FTC Chair, or to recommend candidates, we’d see progressive but mainstream competition agencies,” Stephen Calkins, former FTC general counsel in the Clinton administration, wrote in an e-mail.

“On the other hand, the [progressive] Open Markets group [Open Markets Institute] would be lobbying hard for the appointment of leaders like Commissioner Chopra and, were they to succeed, that would be a different approach,” Calkins added. (Chopra’s term expired in September, but he could be nominated again.)

Biden’s options may be limited, given the likely GOP control of the Senate, which must confirm anyone nominated to the FTC. The chamber is unlikely to confirm anyone its Republican members consider to be too progressive. Senate Commerce Committee Chairman Roger Wicker of Mississippi is a pro-business conservative Republican who has supported the agency.

FTC Chairman Joe Simons hasn’t said how long he intends to remain on the commission. Multiple sources suggest he will step down, but the timing of such a move isn’t known. One factor on that timing may be the agency’s Facebook probe, which may result in an antitrust lawsuit. The FTC has invested much time and resources into the probe, so Simons may want to remain for what would be a landmark case on his watch. But even if Simons decides to stay on the commission, Biden could designate someone else as chairman.

The DOJ and FTC have had some acrimonious clashes, from clearance fights over which agency will handle high-tech matters to the battle over the FTC’s lawsuit against Qualcomm, yet there’s hope new leaders will restore greater comity.

In that Qualcomm litigation, the DOJ, in a filing before the Ninth Circuit Court of Appeals, blasted a lower court ruling in favor of the FTC’s case that Qualcomm, which makes modem chips, had rigged the market. The DOJ said the decision “threatens competition, innovation and national security.”

Though the Ninth Circuit overruled the FTC’s win, the bitter public exchanges in the case, according to some veteran practitioners, were unprecedented and left scars.

“I have to assume that the next AAG will meet with the next FTC chair and try to reestablish harmonious relations between the two agencies,” Calkins, a law professor at Wayne State University, added in remarks prior to Biden's election as president. “It is harmful to good competition enforcement to have the two competition agencies at war with each other. I look for a negotiated truce whether or not Trump is reelected. (In truth, if Biden is elected and appoints a respected AAG, there won’t be much to negotiate — the two agencies will just go back to customary behavior.)”

Then there's Makan Delrahim, who's served as the antitrust division chief since September 2017, an unusually long tenure for that post. The first registered patent lawyer to lead the division, Delrahim made waves with his approach to intellectual property.

Delrahim questioned whether the Obama administration went “too far” to accommodate technology implementers in standard-setting organizations that pay royalties for the use of the innovators’ technology. He expressed concern that the approach risked “undermining incentives for IP creators, who are entitled to an appropriate reward for developing breakthrough technologies.”

Look for the Biden administration to review that stance and, perhaps, change course to the division's former long-established approach, despite the time and energy that Delrahim spent promoting pro-patent-holder views.

Finally, the large number of newly confirmed federal judges will have a big impact on the next administration.

“Even a two-term Biden presidency would be conducted with a very conservative Supreme Court and a reasonably conservative judiciary in general,” Calkins wrote. “Defendants will anticipate good things in court, so they will be less willing to settle and have an easier time winning. The FTC in particular will face massive challenges as it confronts a judiciary keen to trim the wings of government agencies.”