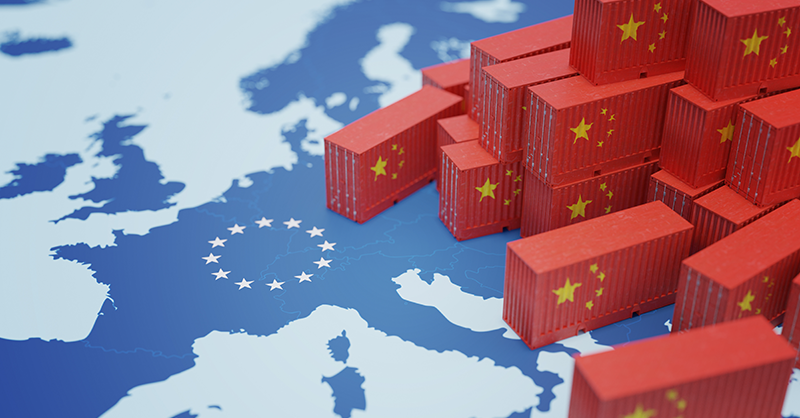 The EU has been tightening its grip on imports that benefit from cross-border subsidies that China is using to expand its manufacturing clout worldwide through investments in other countries.

The bloc’s antisubsidy measures on Chinese firms are now facing a challenge at the EU's General Court.

The legal battle centers on whether the EU has the legal basis to countervail subsidies granted by a country where the production plants aren’t located. It is part of a broader strategic fight against China’s bid to dominate the production of high-tech goods critical for Europe’s green transition.

EU investigators fear that the two cases they’ve looked into over recent years may herald a new trend.

Both probes involve massive Chinese state investments in the form of loans or tax benefits for production plants abroad under the umbrella of government-to-government cooperation agreements. This new type of subsidy is often linked to state-financing schemes under the China's Belt and Road Initiative, which mainly targets developing countries.

EU investigators found in 2020 that Egyptian subsidiaries of state-owned Chinese producers of glass-fiber fabrics had benefited from unfair financial support for joint-ventures established in a special economic zone in Egypt.

The arrangement set up under the 2016 China-Egypt cooperation agreement helped Chinese producers to nearly monopolize EU glass-fiber fabric imports, a construction material used in numerous applications that is both lightweight and strong.

In June 2020, the EU imposed antisubsidy duties of 10.9 percent on imports from Egypt to push back against the subsidies. The move that sent a stark message to Chinese companies: Play by global subsidy rules, even if operating in other countries.

The bloc also imposed a countervailing duty of 13.1 percent on imports of glass-fiber rovings produced by Chinese subsidiaries in the same special economic zone in Egypt.

“The [European] Commission’s decision to countervail financial contributions by a government which is not a government of the country of origin of exports can’t stand because the [EU] basic regulation is clear and doesn’t need further interpretation,” the firms told a court last week.

But EU investigators supported by Tech-Fab Europe, an association representing glass-fiber fabric producers, argue that the Chinese company’s actions can be attributed to the Egyptian government, and as such, are subject to existing antisubsidy rules.

They claim the bloc has no other legal means to challenge these unfair practices.

“The applicants claim that the subsidies they received from the Chinese government are untouchable, they are outside the system, no EU remedy can address them. So, all we can do is to capitulate before the applicant’s cleverness and watch the EU industry die,” Jochen Beck, a lawyer for Tech-Fab Europe said at the hearing.

He admitted that neither EU law nor the global trade rules explicitly “spell out the scenario in front of us today.”

“At the time of the negotiations of the [World Trade Organization’s] Subsidies and Countervailing Measures Agreement the idea that the member would create an industrial colony in other members to compete unfairly was probably not first at mind” when the rules were drafted, Beck said.

He warned the new subsidies are threatening the bloc’s critical high-tech industries.

“The case before you today is about the strategic importance glass-based lightweight material industry and how the Chinese state-owned companies supported by the Chinese government push for the world dominance in this sector,” the lawyer said.

While the bloc’s energy may now be channeled into fighting this case in court, it is unlikely to be the last legal fight over this new form of trade subsidies.

Earlier this month, the EU concluded another investigation into Chinese cross-border subsidies. This time it found that the unfair financial support was granted to Chinese subsidiaries of state-owned companies in Indonesia to produce and export cold-rolled flat steel products.

To counter the unfair practices, the bloc imposed antisubsidy duties of up to 21 percent on imports from Indonesia — a move that is likely to bring about another royal rumble in European courts.