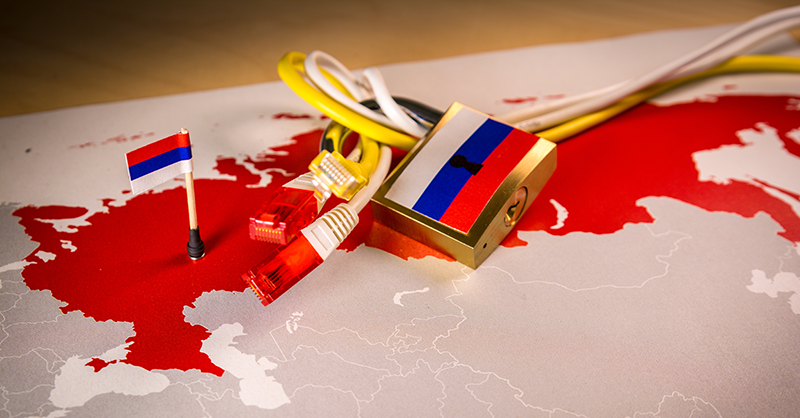 Western efforts to isolate the Kremlin economically and politically have not resulted in that country’s disconnection from the internet, despite the severing of direct sales to Russian service providers by some major American companies.

Russian forces invaded Ukraine two weeks ago in a conflict that has played out online through on-the-ground social media sharing from the war zone and Moscow’s increasingly aggressive moves to block access to social media. The US government is banning information technology exports to Russia, while smartphone providers Apple and Samsung as well as operating system giant Microsoft have suspended sales.

Providers of internet infrastructure — the wires and routers that transport online content — have also cut back on services to Russia. American internet backbone providers Cogent and Lumen each announced this month they are shutting down operations in Russia.

Russian ISPs are able to purchase bandwidth through European-based subsidiaries and third parties, MLex has learned. The handoff between western broadband providers and Russian ISPs historically takes place inside data centers located in Frankfurt and Stockholm out of reluctance by Western network providers to place equipment within Russia’s borders.

“This story of the pending disconnection of Russia doesn’t look very pending anymore,” said Madory, director of internet analysis at network monitoring firm Kentik, in an interview with MLex.

Publicly traded VEON, for example, was founded in Moscow and obtains half its revenue from Russia. But since its headquarters are in Amsterdam, it’s not covered by Cogent’s decision to stop doing business in Russia, company spokeswoman Jocelyn Johnson told MLex.

“Our purpose was not to cut off service to the average Russian,” she said. Cogent’s severing of ties with telecoms specifically located in Russia was done to prevent companies subject to Kremlin control from potentially launching a distributed denial-of-service attack through a connection point, she said.

Even if limited, the actions of backbone providers in Russia highlights that “all along, the real power has been in the 99 percent of internet infrastructure which is not visible to people,” said Laura DeNardis, an American University professor specializing in internet governance.

Although routing policy is governed by multinational nonprofits such as the Internet Corporation for Assigned Names and Numbers, it’s for-profit corporations that mostly do the actual routing of data packets.

It’s important that broadband continue to flow to Russia, DeNardis added. “If Putin were going to design a way to amplify the efficacy of his propaganda, he would dream of the ability to cut off networks.”