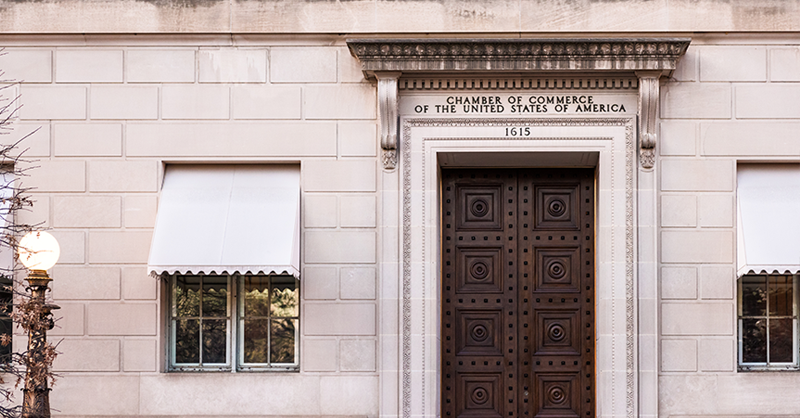 A multifaceted effort by the US Chamber of Commerce has sought to raise awareness about Federal Trade Commission actions the organization views as hostile to the American economy.

“We are not interested in limiting the FTC’s ability to do its job,” said Sean Heather, the Chamber’s senior vice president for international regulatory affairs and antitrust. “But when the FTC decides to move beyond, color outside the lines of the law, when they decide to aggressively move policy that should be debated by the United States Congress — not by a regulatory agency — I think that’s when we start to say the agency's going rogue.”

The Chamber contends the FTC, under the Biden administration, has moved “dramatically” in a different direction than in the past 40 years, departing from its bipartisan approach of policy and procedure. Signaling interest in regulating the unfair methods of competition space, outside Magnuson-Moss authority, is an example, Heather said.

“There is a completely new narrative that has been brought forward, and it’s broader than the FTC. It’s embedded in the president’s executive order on competition that suggests that the entire US economy is overconcentrated, that we have a monopoly problem in the United States, that M&A enforcement has been lax, and that fundamentally we need to remake antitrust law into something that we don’t believe it should be remade into,” Heather said in an interview.

Besides an ad campaign, the Chamber issued a study this month arguing that the economy isn’t overconcentrated. The Chamber also has filed more than three dozen requests for FTC documents under the Freedom of Information Act, including those concerning President Joe Biden’s legislative platform.

“We asked the agency for information about conversations between the agency and Congress around Build Back Better, and how the agency was informing the Congressional Budget Office as to how they would calculate the value of extending civil penalty authority across the agencies,” Heather said.

Despite Chair Lina Khan’s inauguration of monthly open commission meetings and a revised petition process that lets citizens compel the FTC to give an up-or-down on each proposal, the Chamber has blasted the FTC for becoming less transparent. The group also called the use of votes by former Commissioner Rohit Chopra “zombie votes.”

As part of its campaign to make the FTC “accountable and transparent,” the Chamber sought the FTC’s manual of procedure via FOIA and hasn’t received it. It’s prepared to litigate to get it, Heather said.

“There is no justification for anything other than the full and complete release of the FTC procedures manual and a full accounting of the zombie votes that have been cast. Other agencies have made their operations manuals publicly available, and justice and transparency demand that the FTC make public the rules by which it operates,” Heather said.

“At this stage, it is clear that the FTC continues to stonewall our requests for transparency. The agency remains committed to secrecy, rejecting routine FOIA requests and refusing to comply with basic legal requirements,” he said, adding, “the Chamber will continue to fight for transparency and accountability from our government agencies.”

A bully for Big Tech?

Heather said the Chamber is aware of criticism that it’s bullying the FTC on behalf of Big Tech.

“I guess if you look at what we have asked the FTC to be held accountable for, and you go down the list of issues that we flagged, I don't know that those issues lead to you know, nice, clean, easy breadcrumb trails to any one company, let alone any one industry,” Heather said.

He noted the FTC was “flexing its muscles early on when they had a full slate of commissioners.” With Chopra’s departure, a deadlocked FTC, with two Republicans and two Democrats, has stymied actions from studies of pharmacy benefit managers to rulemaking on privacy and other topics. Impacts on mergers and law enforcement are less visible though likely.

The Chamber is in touch with lawmakers and eyeing the Senate confirmation process of Democratic FTC nominee Alvaro Bedoya about whom the group hasn’t taken an official position.

“We think that obviously the ultimate way to keep the FTC accountable is congressional oversight. I think there’s a growing number of folks in Congress that have put pressure on the agency to straighten up and fly right,” Heather said.

Public Citizen, a public-interest lobby group, said the Chamber is directing intense fire at the FTC’s “long-overdue and much-needed crackdown on corporate crime.” Matt Kent, the group’s competition policy advocate, said the things the Chamber is accusing the FTC of doing are fully within the agency’s legal authority.

“It's just different from big businesses’ expectations about the way things are done,” Kent said.

A Public Citizen analysis in January said “the Chamber’s members have a long and varied history of corporate crime and wrongdoing, and that the Chamber represents corporate criminals, lawbreaking big banks, corporate polluters, big tech monopolists and wage thieves.”

Rick Claypool, author of Public Citizen’s report, said he undertook the analysis after noticing when the FTC announced its policy emphasizing criminal referrals, the Chamber followed with a campaign accusing the agency of going rogue.

“It hadn't occurred to me until then, let’s see, you know, if we can figure out who are the Chamber members who we can identify, and what are their records with respect to past histories, violations,” Claypool said.

The report said 111 known US Chamber member corporations have violated state and federal law at least 15,895 times and racked up penalties totaling more than $154 billion since 2000.

Claypool said he concluded the Chamber is going after the consumer protection agency “because it’s representing companies that are frequently the subject of federal law enforcement.”

“So, we typically give the agency a fairly wide berth when they actually go through an enforcement proceeding and not find ourselves trying to influence or be in the middle of that,” he said, but “instead speak more to the policy kind of framing for its enforcement activity and for efforts to change that framing.”