Apple’s purchase of appmaker Shazam doesn’t meet the criteria for EU merger control, but the European Commission will still get to review it, just as happened with Facebook's purchase of WhatsApp.

These examples should soothe concerns that there’s a risk of megadeals in the digital economy slipping through the cracks: With or without tinkering with its thresholds, it seems that the EU regulator is getting to review deals with cross-border implications when it counts.

High-profile digital deals have raised alarms that perhaps competition authorities' mechanisms for deciding which cases to review may be outdated.

The trigger for a review to head to Brussels is the size of corporate sales. In the present case, while Apple is plenty big enough, “target” company Shazam isn’t.

But the value of services such as music-identification app Shazam and group messaging app WhatsApp isn’t necessarily reflected just in the money they make. Their core value might rather lie in their massive customer base and the data they control.

Shazam, for example, says  it “connects more than 1 billion people.” Regardless of whether or not it reaches the turnover threshold, regulators might understandably want to examine the risk that Apple might use that huge user base to promote its own Apple Music service, at the expense of competitors such as Spotify.

And when Facebook bought WhatsApp for $19 billion in 2014, its quarry boasted 600 million users worldwide. Whether WhatsApp was making good money or not, regulators still wanted to check whether adding those users to Facebook Messenger’s existing user base would give it too strong a position in messaging services or online advertising.

The phenomenon is not limited to the digital realm. Also in pharmaceuticals, a company with the next blockbuster drug in development might not yet have sufficient sales for its takeover to get reviewed.

Regulators have been questioning whether the threshold approach ensures they effectively catch enough transactions that might affect competition.

The European Commission is still reflecting on whether to amend its rules to allow the scrutiny of deals that now fall outside its remit. Germany and Austria have already taken the plunge and added “deal value” thresholds to their laws.

But while Shazam’s sales weren’t high enough to clear the EU hurdle, the parties still had to notify some national competition authorities. Notably, Austria’s ordinary thresholds were enough to snare it, without even necessitating recourse to its new “deal value” trigger.

Now the case has ended up in Brussels under the current EU setup: The Austrian watchdog — joined by France, Iceland, Italy, Norway, Spain and Sweden — asked the commission to take over the review. It obliged, agreeing it was “the best-placed authority to deal with the potential cross-border effects of the transaction”. It has set a deadline of April 23 to decide on the deal.

The commission got to review the Facebook's WhatsApp deal, too, after a request from the social-media company itself. Companies can ask the regulator to review a merger in cases where they would have to make separate filings in at least three EU countries.

These examples call into question whether worries about deals slipping through the cracks are overblown. Even without legislative changes, the deals are getting EU-level scrutiny, even if it is via the backdoor.

Certainly, the EU watchdog might not be very comfortable relying on the discretion of national authorities or the preferences of individual companies to get to review deals. There is no requirement for national regulators to refer up, and companies aren’t obliged to opt for the commission's "one-stop-shop" option when facing multiple national filings.

But tinkering with the time-honored, transparent turnover thresholds risks leaving companies uncertain of when and where to file their deals. In that light, the EU may decide the backdoor route is good enough.

Share this
US, Europe Tighten Scrutiny of Inward Investment - Focus on China 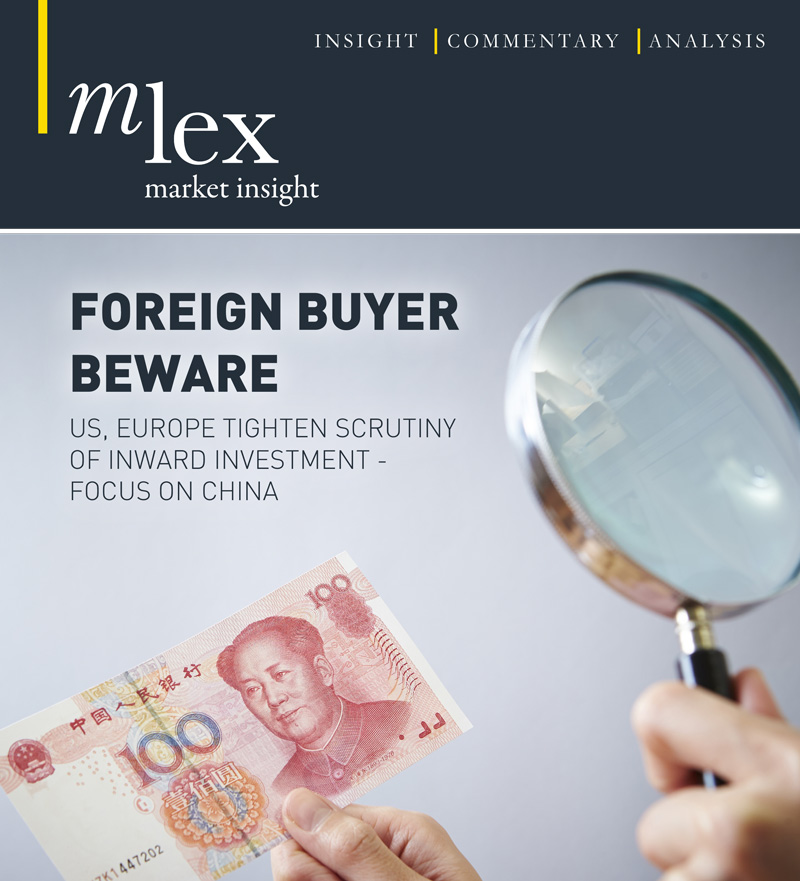