Taking the pulse of the market place

A whitepaper collating the opinions of 100 senior general counsel and partners at top UK companies and law firms. 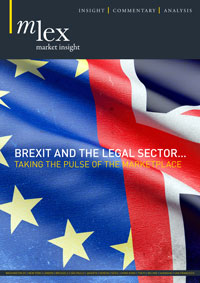 MLex, which provides insight, commentary and analysis on regulatory risk around the world, has today released the findings of a study that highlights the concerns that both in-house lawyers and partners in law firms share over retaining talent after the UK leaves the European Union, as well as how they are managing increased resourcing pressures.

The ability to retain talent in the wake of Brexit was one of the biggest concerns listed by the respondents, with nearly nine out of 10 (88%) of partners in UK law firms saying they are concerned about losing talent to international firms.

The results also revealed that almost half (46%) of in-house lawyers view HR laws and policies as their biggest concern as the European Union and UK work through Article 50. More than four out of 10 respondents (42%) said that their businesses would definitely relocate legal staff once Britain formally leaves the EU in order to offset the impact of limited access to skilled European labour. Over half (58%) of partners in UK law firms said they have plans to move elements of their operations to a jurisdiction within the EU after Britain exits.

In-house lawyers said that their businesses are increasingly turning to external sources for guidance. Over half (58%) plan to change their overall legal spend in the next 12 months as a direct result of Brexit, and nearly eight out of 10 (79%) said that they would be spending it on increasing their external legal advisers, which has resulted in an increase in new business enquiries for law firms.

Despite longer-term fears about the retention of staff, legal firms have embarked on a rapid recruitment drive in a bid to manage this increased demand for legal support following the referendum. MLex's survey found that 60% of UK law firms have hired additional staff to deal with the influx of requests for legal advice from clients as a direct result of the Brexit vote.

"Until the exit agreement is agreed and in place, including the UK's position on immigration, legal teams are in the dark when it comes to the barriers they could face recruiting overseas talent post-Brexit. The Immigration Act 2016, which imposes a charge on companies employing skilled foreign workers, was due to be introduced in April 2017, but this could now be brought forward following the result of Brexit, which will offer more clarity.

"In addition to the threat of losing existing employees to international players, attracting new talent may prove challenging post-Brexit. Non-British EU citizens make up between 10-20% of the trainee intake in corporate firms located in London, so any change in their eligibility to work in the UK could have a negative effect on the recruitment of future talent. Recruiting and developing overseas talent is critical to remaining a global player in the legal market.

"Although lawyers across the UK have experienced an influx of enquires as businesses grapple with the wide-ranging implications that Brexit has on tax, employment, financial regulation, intellectual property, company law and international trade, this may be short-lived. Spikes in recruitment levels to cope with the increase in workloads may be a knee-jerk reaction. Firms and legal teams will need to manage their headcounts carefully and ensure that they are aligned to the future level of business activity. As our study indicates, this may mean moving lawyers between practice groups or to international offices to reflect the changing nature of the UK legal sector."

MLex takes your privacy seriously and we will only use your personal information to provide you with your free copy of 9 out of 10 partners of UK law firms are concerned about losing talent to international firms post-Brexit, new study reveals. By downloading your copy you are agreeing to our Terms and Conditions, our Privacy Policy and our Cookie Policy. We will not share your personal information with any 3rd parties.

However, as we believe that you may also have an interest in receiving information about similar products and services in the future we may from time to time contact you about related products. You can choose not to be contacted and manage your communications from MLex in our Preference Center.